Can Constructive Possession and Multiple Occupants Charges Be a Good Fit for Acquittal? Ask a Miami Criminal Lawyer

SUBMENU
1.52k
Facebook Twitter LinkedIn Google+ Pinterest WhatsApp Email Copy link Your browser does not support automatic copying, please select and copy the link in the text box, then paste it where you need it. 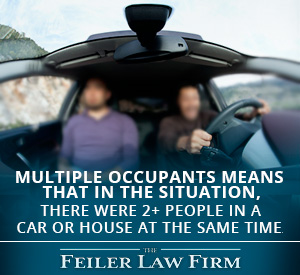 Two men were sitting in a car smoking a joint. Police observed them and arrested them. The lawful search of the car revealed cocaine sitting in plain view on the center console between the driver and passenger. The driver owned the car. The driver was arrested for the cocaine. So was the passenger.
This true scenario occurred last year. This illustrates a situation where neither person was in "actual" possession of the Cocaine, but both were presumably in "constructive" possession of the Cocaine. The term "multiple occupants" means that in the situation, two or more people were in a car or a house at the same time.

Mr. Session, the driver who was arrested, went to Trial on the Cocaine charge. There was no dispute about the Marijuana. As is customary, the State put on their Police Officer witnesses who, in this case, truthfully testified about everything that occurred. The State showed the Jury the evidence (cocaine) and called the lab expert, who correctly identified the white powdery substance as containing cocaine.

Following the close of the State's case, the Miami Criminal Lawyer made a Motion for Judgement of Acquittal, what we call a "JOA". The Attorney stated, that although there was circumstantial evidence presented, that there was no evidence that Mr. Session had "dominion and control" over the cocaine. Also, there was a "reasonable hypothesis of innocence", namely, that the cocaine could have belonged to the passenger! The State had not proven otherwise. No fingerprints on the plastic bag, DNA, or other evidence was produced proving it belonged to Session.

The Judge denied the Motion for JOA. The Jury went on to convict him. Session took an Appeal. The District Court of Appeals reviewed the case, the evidence and the Motion for JOA. That Court reversed the conviction and ruled that the Judge made an error. The Trial Judge should have granted the JOA. Mr. Session was acquitted and set free. 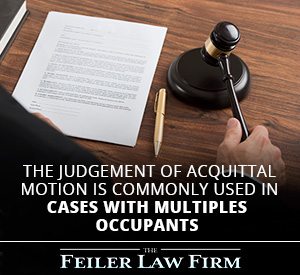 Presently, I am representing a client who was in a home where marijuana was present. Although there is little proof he knew it was there, it was in the kitchen, it was several pounds, and marijuana has a very potent aroma. So, let's assume it is reasonable to believe he knew it was there. Next is the question of whether he had the "ability to exercise dominion or control"? There was at least one other person in the house when Police were allowed inside. There were two others that had been in and out of the house observed by the Police. This seems to me to be a classic situation of constructive possession with multiple occupants. I have given the case law to the Prosecutor and hope he will agree to Nolle Prosse the case. Otherwise, we may have to take it to Trial and ask the Judge for a JOA.

This situation occurs all of the time - drugs or guns in the trunk of a car for example. The Police often arrest the driver, particularly if he is the owner of the car. However, it is quite possible that the driver does not even know the passenger placed an object in the trunk. If this situation happens to you or your family or friends, have them contact me at the Jeffrey Feiler Law Firm for legal representation.


1.52k
Facebook Twitter LinkedIn Google+ Pinterest WhatsApp Email Copy link Your browser does not support automatic copying, please select and copy the link in the text box, then paste it where you need it.