How Does Florida's Stand Your Ground Law Work in Court?

SUBMENU
1.6k
Facebook Twitter LinkedIn Google+ Pinterest WhatsApp Email Copy link Your browser does not support automatic copying, please select and copy the link in the text box, then paste it where you need it. 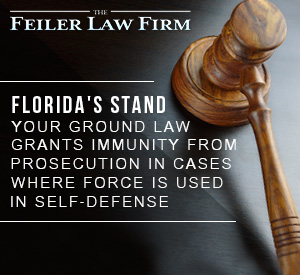 The Florida legislature has created this amazing law which grants complete immunity from prosecution in cases where force is used in self-defense or defense of another person. There is no other criminal law on the books which gives a Judge authority to grant a defendant immunity from prosecution. If the Judge decides at an evidentiary hearing that the accused was justified in his use of even deadly force, the case is effectively dismissed and never goes to trial.

How Is This Different from Other States?

This is completely different from the classic case where a victim is killed and the defendant asserts self-defense as an affirmative defense. It would be up to the jury to decide if it was self-defense and if it was justifiable. Not with this law. No trial, no jury, only a Judge hearing a pre-trail Motion can grant the defendant this immunity. I have used the SYG defense successfully already, and I have a case now where I just filed the SYG motion.

Simply put, it is the single most powerful weapon in the criminal defense attorney's arsenal.

What Do the Laws Actually Say?

Stand Your Ground is protected by Florida law. Here is the actual letter of the law:
Florida Statute 776.012(2) states;


A person who uses or threatens to use force as permitted in Statute 776.012 is justified in such conduct and is immune from criminal prosecution, unless the person against whom force was used or threatened is a law enforcement officer who was acting in the performance of his or her duties.

What Does This Mean for Defendants?

The Florida Supreme Court has determined that use of a firearm is "per se" use of deadly force. A case which explains this for example is Hosnedi v. State, 126 So3d 400 (Fla 4th DCA 2013). So, if someone points a gun at you, it is legally determined that you are being threatened with deadly force. You can then shoot and kill that person and be immune for prosecution. No trial, no jury
For more information on Stand Your Ground law, contact The Feiler Law Firm at (305) 670-7700.


1.6k
Facebook Twitter LinkedIn Google+ Pinterest WhatsApp Email Copy link Your browser does not support automatic copying, please select and copy the link in the text box, then paste it where you need it.