SUBMENU
32.82k
Facebook Twitter LinkedIn Google+ Pinterest WhatsApp Email Copy link Your browser does not support automatic copying, please select and copy the link in the text box, then paste it where you need it. 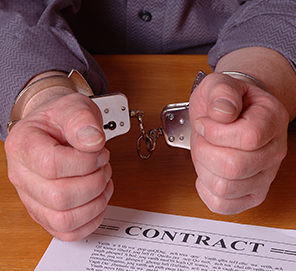 Also known as petty crimes, infractions consist of minor criminal offenses. Most infractions are punished by fines instead of jail time and do not require attendance in court. Infractions are classified as local crimes against traffic or noise violation laws. Although an infraction is considered to be a minor case, failure to resolve the penalty charges within the deadline could lead to greater consequences. For example, multiple points on a license could lead to license suspension or revocation. In addition, the accumulation of infractions could develop into a misdemeanor or possible jail time. Different infraction cases include:
Misdemeanor

Felonies are the highest level of criminal offenses involving the most severe penalties. Felony charges affect every member associated with committing the crime including the offender and their accomplices. An accomplice includes anyone who aided the offender before, during, and after the crime. Felony penalties are dependent on the crimes' level of severity and typically involves prison time. Felony prison sentences range from over a year to life without parole and in some cases execution. In addition, felony offenders lose their civil rights such as the right to own a firearm and in some cases the right to vote. Felonies are also difficult to expunge and will often remain on an individual's record permanently. Felonies are divided into violent and non-violent crimes and are classified into several categories. The most common forms of felonies include:
A criminal defense attorney can assist offenders charged with misdemeanor and felony crimes. In addition to offering professional legal advice, they can effectively represent an offender in court. An experienced criminal defense attorney can even reduce a felony charge to a misdemeanor. It is essential for offenders to hire a competent and reputable criminal defense attorney in order to improve their verdict in court.
Whether an offender is facing felony or misdemeanor charges, hiring a strong and experienced Miami criminal defense attorney from the Feiler Law Firm will help decree a more desirable outcome. They can help offenders save invaluable time while avoiding the unnecessary costs associated with arrests and court.

32.82k
Facebook Twitter LinkedIn Google+ Pinterest WhatsApp Email Copy link Your browser does not support automatic copying, please select and copy the link in the text box, then paste it where you need it.